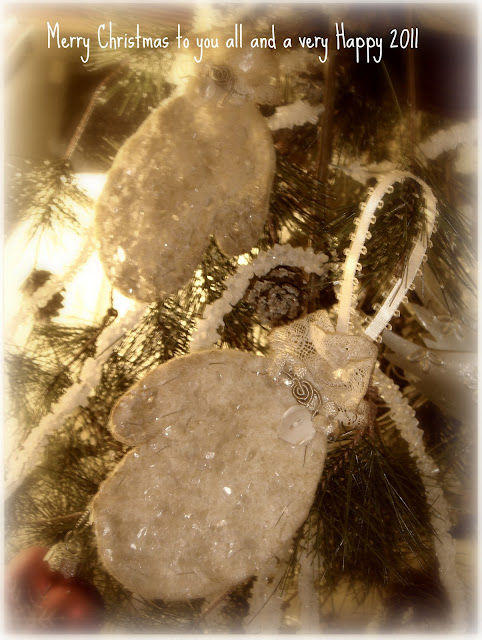 Thankyou all for your continued support, visits and comments I really appreciate it, even though I haven't been the best blogger this year.
I just would like to wish you all a Very Merry Christmas - I'm off tomorrow to the family for Christmas but should be back next week - weather permitting LOL This is the first Christmas with everyone for 15 years and I am so excited!!
at Wednesday, December 22, 2010 27 comments:

Its a Dogs Life - Harry Update 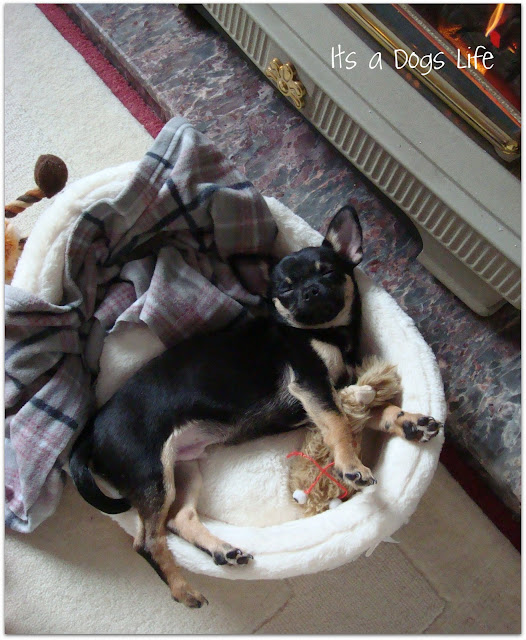 Good Evening my friends - Harry here, I've managed to sneak my last visit in before Christmas arrives, My mum says cos I've been good I will most likely get some pressies from Father Christmas - I do hope so, as all these strange parcels keep appearing with lots of new smells around them.

I've not been able to go outside all week, but Im quite happy about that as its very very cold on my toes, but mum bought me a wonderful red puffa coat to wear and I'm very snug in that, but my feet get too cold, so I haven't been out.

I found the warmest place in the house the other day, my mum put the fire on and oooo it was toasty, I put my bed here myself much to mums amusement - she never offered to help, she was laughing too much, then I gathered all my favourite things including the toy that was Tashas (its now mine) and I guard it with my life as you can see I cuddle it in my bed. Mum took this photo of me - just to show you all that I can be quiet too sometimes.

Well I wish you all a Merry Christmas, I expect mum will be on before Christmas with another posting - as far as I know mum says weather permitting I'm off to see Bailey and Bonnie for Christmas - yippppeee!! I hope the snow stays away so mum can drive over.

Email ThisBlogThis!Share to TwitterShare to FacebookShare to Pinterest
Labels: Harry 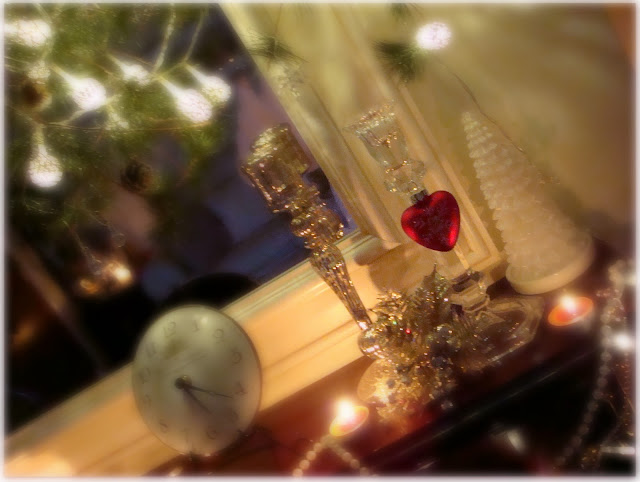 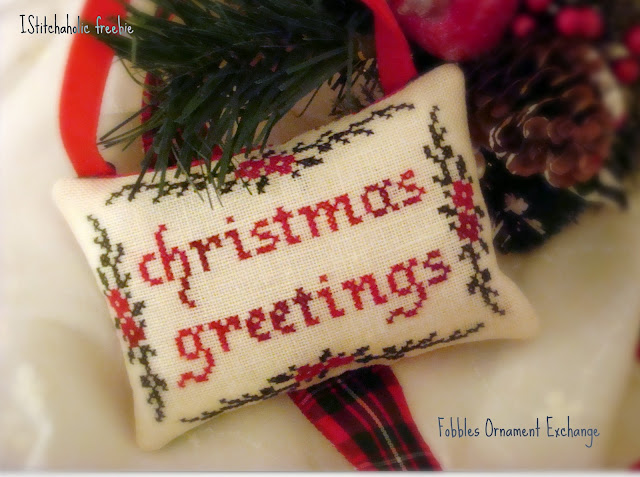 Here we go, another Christmas Ornament, this time its designed by the lovely Carol R http://istitchaholic.blogspot.com/ this was a pretty little freebie that she designed for us last year.

This is for the Fobbles Christmas tree ornament exchange.
I have stitched it on 36ct antique cream linen and used a green NPI silk thread and a red (poinsetta) Gloriana silk thread. I have finished it very simply as I felt it really didn't need any enhancement to take away the lovely simplicity of this design, all its got is a red velvet ribbon hanger. Thankyou Carol for designing this lovely little ornament, I loved stitching it. 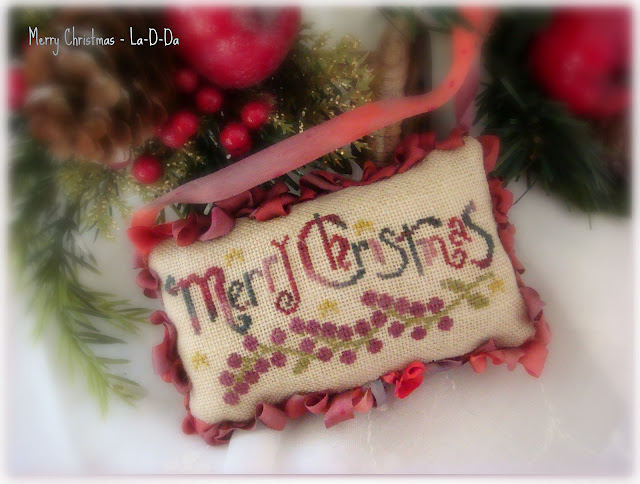 Yet another ornie!! This time its by one of my very very favourite designer - La-D-Da. This is from the 2009 JCS Ornie magazine.
I've stitched this on 30ct R&R linen - iced cappuccino and its 1/1 and I have totally changed the colours and picked my own, they are all Vicky Clayton silk threads, but I couldn't tell you their names as I lost all my labels. I've finished it with a pretty green/mauve moire shot silk and edged it with a varigated silk ribbon that I found amongst my ribbons - it was actually the ribbon shades that helped me choose the thread colours.
I'm not giving this one away, I'm keeping it, as I loved it so much.
Til Later - Hugs 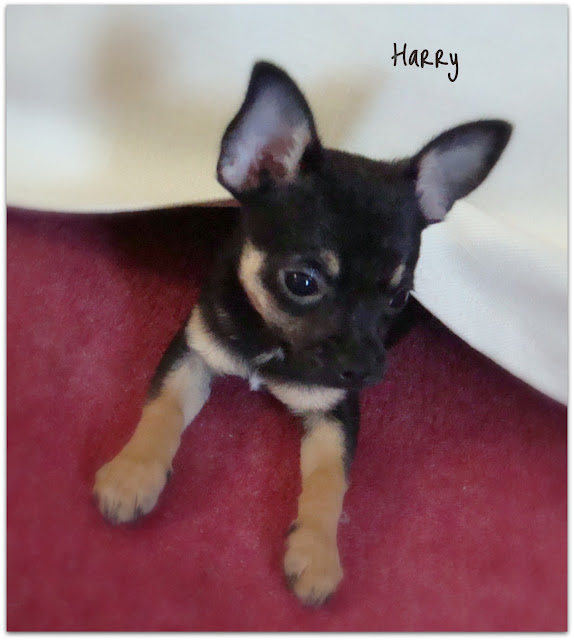 Hello my fans, my mum says that some have asked about me and that my absence has been too long - Blame mum for that she has been too busy on this computer to let me anywhere near it - Its always 'Harry No!" these days - sigh...

I helped her with the Christmas decorations last week, that was great fun, I found some shiny round things which the Big fluffy thing called Tasha said were baubles?? anyway I had a good game with mum, she was a panting mess when she finally caught me, she spoilt it all a bit by hiding the shiny bauble, but I have seen where she put it but its a little too high for me to get, as its hanging from the light! It looked far better under the sofa with me than where she has put it.

That big fluffy thing seems to be getting a little nicer to me, she actually gave me a kiss the other day, but then I went an spoilt it all, by grabbing her 'normous' tail, she didn't like that and smacked me hard so I hid behind mum. She sat on top of my house last night and watched me the whole time - mum says thats good as she now wants to be in the same room as us, I don't know I think I preferred it when she wasn't with us, she gives me the 'evil' eye a lot especially when I go near the 'normous' tail.

I got weighed tonight I weigh 3lbs 9oz, I've put on 70z this week mum thinks I've grown a lot too, she says my tail doesn't look like a pencil lead any more, so since I came to live with mum I've gained loads of weight and grown a lot, as I only weighed 1lb 4 oz when I came here, Mum is very proud of me she says, especially as she says I'm a picky eater - I don't know what she means, her dinner always smells nice and I like the cheese cubes she gives me sometimes and I love fish - especially if its the fluffy things and I can steal it.

Well its time for bed so I have to go... Night night sleep tight and don't let the bugs bite

Email ThisBlogThis!Share to TwitterShare to FacebookShare to Pinterest
Labels: Harry 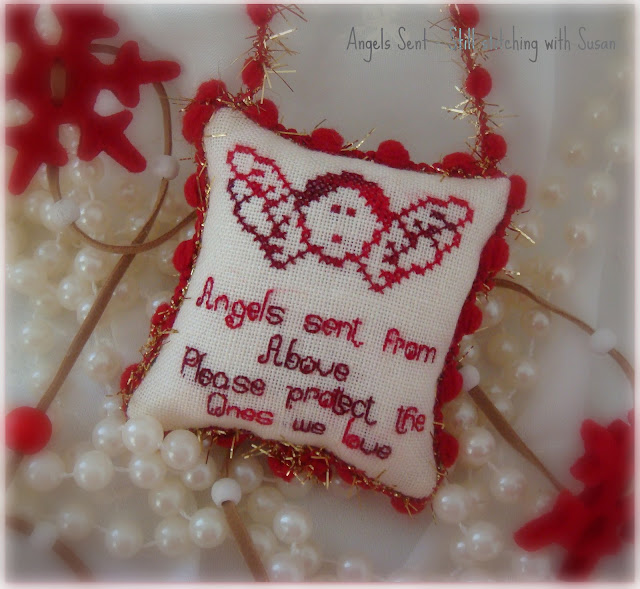 Another ornament from the 2010 JCS Ornament mag. This one is by 'Still stitching with Susan, LLC and is called Angels sent. I have stitched it on 32ct antique white linen and used a snippet of red silk thread I had in my stash - I've lost the label from the thread so I couldn't tell you what colour it is or make, but I was pleased with how the varigation turned out., I've trimmed it with some red pom pom braid.

Quiet weekend this weekend here, Harry and I have been out a couple of times for a little walk and we delivered cards and some pressies, he seemed to like that but there again he is a sociable little fella.
Til Later - Hugs 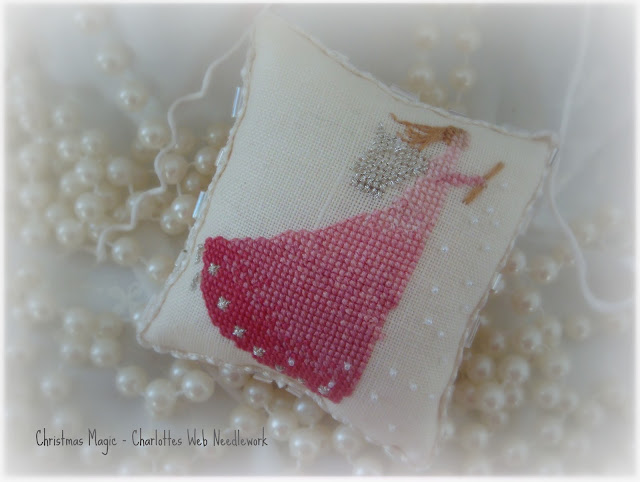 Just a little ornie which I'm giving as a gift to a friend, its from the 2010 JCS Ornament mag, and its by Charlottes Web Needlework.

I've stitched it on 36ct antique white linen and used DMC threads, I've added white beads instead of the recommended glass beads and its trimmed with white braid and I've added silver and clear bugle beads.

Hope you are having a good weekend and its not too hectic, all our snow has gone for the moment, I hope it doesn't return anytime soon! 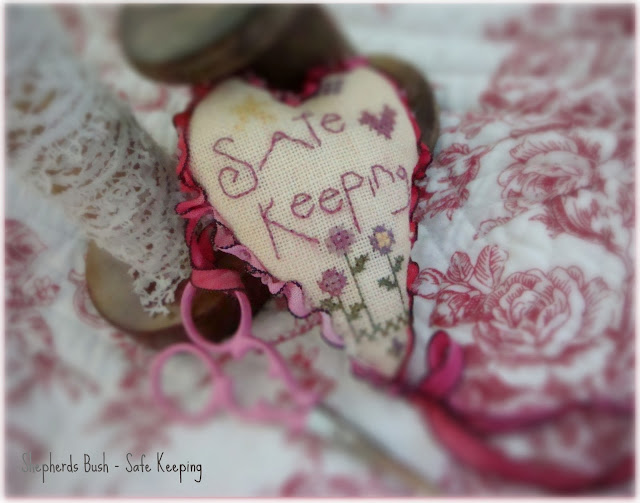 This delightful, little pretty is my latest SB finish - its a small kit and I have used all the recommended threads and fabric that was included in the kit, its such a pretty trifle and I do so love the gorgeous silk ribbon that was included the colours are so lovely. I found I had the perfect pair of scissors too within my scissor collection, the pinks match perfectly. 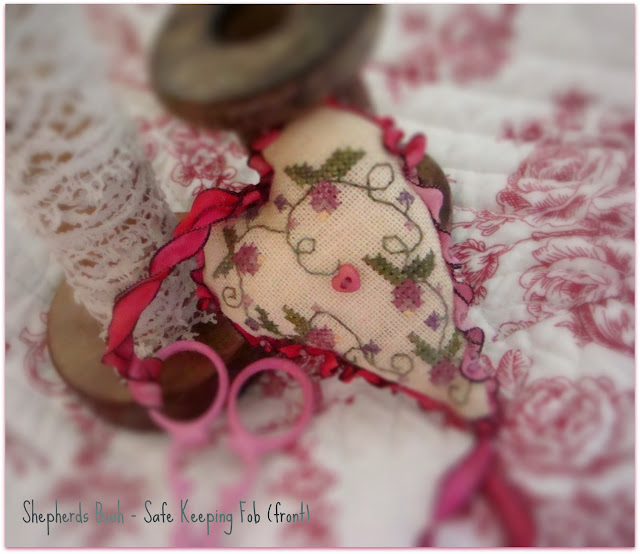 Hope that you are all keeping warm with this snowy weather it seems we are having a lot here in the UK and its predicted to carry on til Christmas, yet again work as deemed that we can't go in, I wouldn't mind if I got paid like the staff do when its adverse weather or that it is impossible to get to work, but as Agency personnel I don't get paid and I could get into work, if they would let me, I really don't need this, this close to Christmas, what with them already cutting our hours down every week, my poor bank balance is really suffering - at least I have the consolation that the rest of the Agency staff don't get paid either so we are all suffering the same problems - Sorry small vent, quite annoyed as you can tell.

I will fill my day with Harry, cleaning upstairs and wrapping some gifts I think, then hopefully a little more finishing work to be done. Do you like my new blog background? I thought I would go a little more Wintery.

Enjoy your day wherever you may be 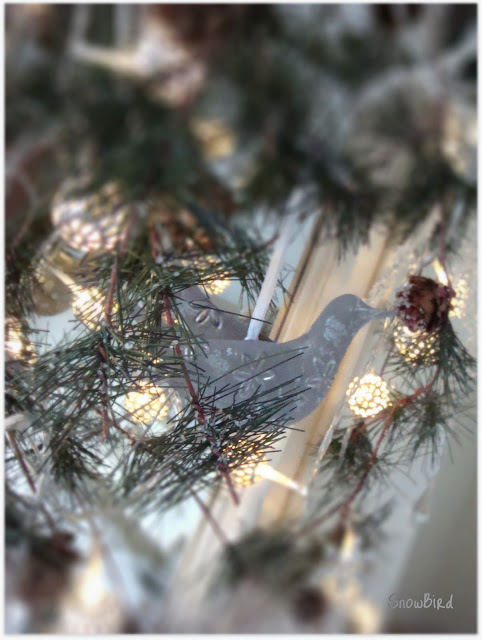 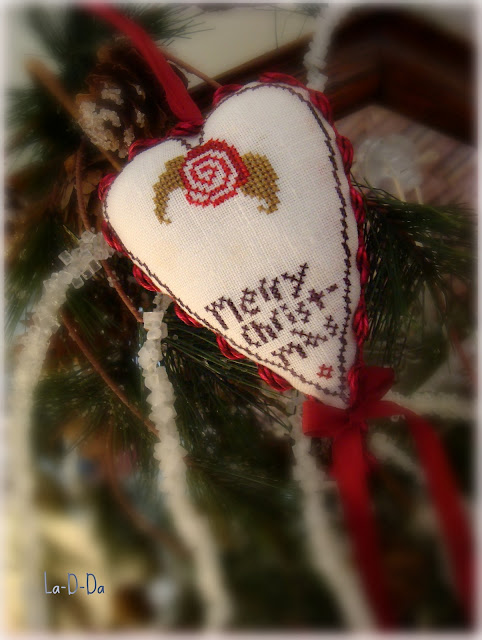 Instantly recognisable I know, and I guess there are a lot of us stitchers out there that have done this pretty little Christmas ornie, but I do so love this one.

Edit: **I've been asked by some of you where the design is from - just to let you know its from 2005 edition of the JCS Christmas Ornament magazine.**

I have stitched it on 36ct white linen, using silk thread. The backing fabric is deep red slik moire and the trim is silk ribbon and silk roses.

I have been finishing a couple of other ornaments and also my knitting, I've made 2 pairs of socks and the most gorgeous bag, which I am just doing the final embellishment for, the socks and the bag are Christmas gifts, but I will show you them here first.
Hope that everyone is keeping warm and cosy, its really very cold, snowy and icy here in Cumbria, Harry doesn't like going out in it at all, so House training is much much slower than I wanted, but I can't let his little paws get too cold now can I!

He helped me put up the Decs yesterday - that was fun .... NOT!! LoL!!, I'll start sharing pics with you over the coming week, Have you got yours up yet?? 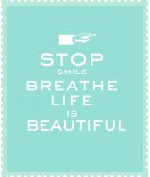 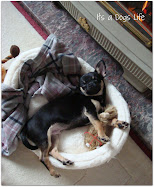